Get to know Marty “Riet” McEwen! 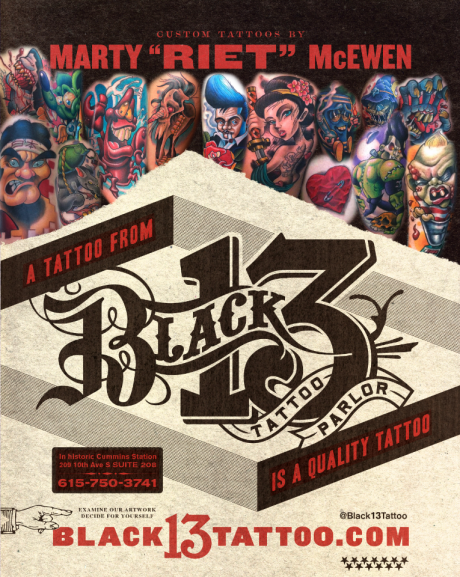 Our beloved Marty is named after country singer Marty Robbins and grew up just outside of Nashville in LaVergne TN. Marty’s interest in tattooing led him here because he was a fan of Josh Woods illustrated artwork and he ended up apprenticing under Josh here at Black 13 in 2008. As his apprenticeship came to a close, he started tattooing full time with us in 2010. Marty’s art background revolves heavily around graffiti where he gets to bring his amazing illustrations to life on large canvases and outdoor walls. He was given the name Riet from a good friend that was showing him the ropes in 1995 and it was suggested he use the e instead of the o in the spelling to stand out and give more variations in the way he could stylize the writing of the word. He’s a huge fan of the 80’s and you will see this a lot in his subject matter ranging from 80’s cartoons and action figures, wrestling, horror characters, etc. Marty would like to remind everyone that he’s a lover, not a fighter, and that a country boy can survive! Check out more of Marty’s work here.